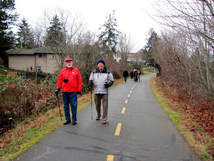 Larry & Dave make their way along part of the Lochside Trail near Swan lake.
On January 3rd 2018 the CANramblers did their first walk of the new year around Swan lake. It was a cool but dry day and there was no ice left on the lake so the waterfowl were out in great numbers.  Lots of wild birds to be seen too, and since many people purchase grain to feed the birds they are quite tame.  A mature Bald Eagle was spotted at the top of a tree overlooking the lake.  We went to the Monkey Tree Pub for lunch.  Always nice food there.
Terry's photos
Claudia's photos

Going down a steep part of the Royal Roads trail.
On January 10th the Canramblers met on Wishart Road and parked across from one of the gates into the Royal Roads property.  We walked in and followed a trail that lead down through the forest and soon it became quite steep.  We carefully went down and came out onto the Castle Road near the Cedar Building.  The old Dairy Buildings for those who know the area well.  We walked toward the castle and tried to find the trails that we wanted that lead uphill near the recreation building but failed to see those trails so continued on to the library and up the stairs to the residence building.  We soon realized that we had passed the route that we wanted to take uphill and headed back along a one way road and back to the West Campus Road.  At this point we were just as happy to walk up the paved road as it is less steep than most of the trails.  Near the top of W Campus Rd. we turned off into a trail that lead us back to the gate where we first entered the grounds.  It was very close to our parking place.  A short drive took us to the Country Rose Pub for lunch.  The food and beer menu is much better now it is under new management and ownership.
Phil's photos
Claudia's photos
Terry's photos 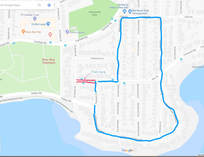 It was really windy when the Canramblers parked on Ross Street and walked up and down the streets to the east of there looking for interesting heritage and other well restored homes in this area of Victoria.  It's nice to see so many well kept homes and interesting gardens.  The waves were really pounding in on Ross Bay but when we got over near Gonzales Bay the wind had died down a bit and the sea wasn't as choppy.  Our walk ended at Lillian Street and most of the group walked over to the Ross Bay Pub for lunch.  It was pouring rain when we came out after lunch.  I'm glad that I moved my car to the Fairfield Shopping Center.
​Claudia's photos
Phil's photos
Terry's photos
​Dave's photos
Larry's photo 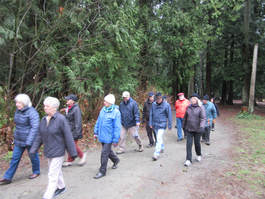 A large group of us went to Centennial park in Central Saanich.
After a really wet and stormy weekend the Canramblers went out to Centennial Park in Central Saanich to walk the trails of this beautiful forest park.  The trails were mostly in pretty good condition except for a couple of big puddles that were easy to walk around.  We walked most of the trails, and headed back to the cars for the drive over to the Waddling Dog Inn for lunch.  Our group was large, 17 people but they situated us in group dining room that suited us very well.  I think that most of the group enjoyed their meal.  We hadn't been to this pub in many years.  It was a nice experience.
Claudia's photos
Terry's photos
​Phil's photos 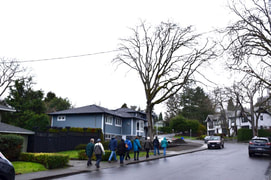 Walking through the Rockland area. Another rain free walk!
The rain held off – again – as we headed south on St Charles, led by our intrepid Dave.  Some of the houses are truly magnificent in this area, several of which are now Guest Houses or perhaps condos.    We turned left onto Rockland but we all missed the turning onto Terrace!  So Phil took over and lead the group down and around a byway, returning back to Rockland and Terrace.   The latter is not much more than a paved path on which a Blue box truck was doing its duty.  We managed to skirt this truck and two others to reach Oak Bay Avenue. Part of the south side of Oak Bay Avenue near Fort St had suffered a rock wall slide that resulted in us walking between orange pylons right on the street.   We reached our cars, said goodbye to Heather and Diane and made out way to Christy’s Pub.  Surprise – lots of parking spaces; good food and a good waitress.   We were joined for lunch by Cathy who now works nearby.
Phil's photos 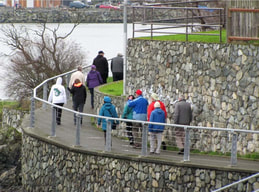 Along the Westsong Walkway
It was a dull and cloudy day, but on the other hand the temperature was mild with no wind or rain. All in all it was a really nice walk. The Westsong Walkway is really a beautiful place to walk in Victoria.  We are so lucky to have a place like this so close to downtown.  We did a short detour to see the progress of the new mega Yacht marina first.   Along the way we saw an oyster catcher, a Bufflehead duck and a Great Blue Heron and watched the sea planes take off and land just off shore.  We went to Spinnakers BrewPub and Restaurant for lunch.
Claudia's photos
Terry's photos
​ Phil's photos 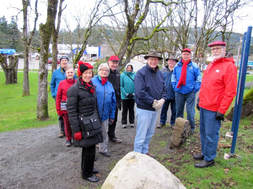 For Valentines day some of us wore red. This is at the start of the path.
.Today the CanRamblers went out to the Westshore Recreation Center (the Juan De Fuca Rec Center) and starting near the Library we walked through the gravel path that leads through the woods. Then it leads onto the path that goes all the way around the golf course and the soccer fields, the Lacrosse box and finally the old Commonwealth Velodrome.  The people that did the whole walk were finished in well under an hour.  We drove back to the 4 Mile Brewpub for lunch.   The weather was clear and cold, no rain.
Terry's photos
Claudia's photos
Phil's photos 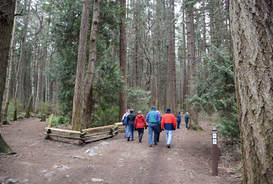 The CanRamblers head out on the path through the southern part of Mt. Douglas Park.
It was a nice walk today in the cold 2c air.  There was very little moisture so it felt warmer that it was.  We only did a 45 minute walk this day around the south part of the park.  We went to Maude Hunter';s Pub for a nice lunch afterwards.  The snow started while we were having lunch. It didn't start to stick until we were home again.
Claudia's photos
Phil's photos
​Terry's photos 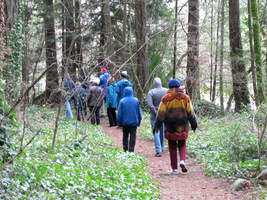 In Balsam Park greenspace
We recently discovered a small green-space/park called Balsam Park that is right next to the Victoria International Airport on Dickson Ave.  This park has a nice winding path that goes through a forest of tall timber and lots and lots of ivy.  A start has been made to control the ivy but it looks like a lost cause because there is so much.  It's pretty though, and an easy walk.  The second walk started in Blue Heron park just off of MacDonald Park Road north of Sidney.  It was so small that in no time we found ourselves entering the MacDonald Park campground which looked totally abandoned.  There were so many fir needles down on the road that you couldn't see that we were walking on a paved road.  Of course there were no campers around at this time of the year, but we wondered how much use this little campground actually gets.  It was very cold in the strong wind that day. Blue Heron Park looks quite run down these days.  A huge construction development next door makes it hard to find these days.
Claudia's photos
Dave's photos
Terry's photos
Phil's photos 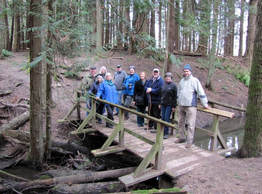 On a bridge in Beaver Lake Park.
The CanRamblers went out to Beaver lake Park and walked the main trails that start from the parking lot to the north before turning back onto a different path that lead back to the starting place.  The trails closer to the highway were too wet or muddy at this time of the year but we managed to find lots of mostly dry trails to enjoy a 5km walk.
Terry's photos
Phil's photos
Claudia's photos 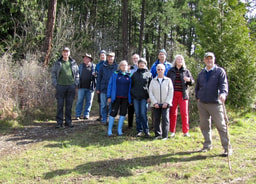 A group photo of the walking group in the meadow near the lake.
The CanRamblers parked on Greenlea Ave. and walked through a path that leads off of Viaduct Ave. E.to Wilkinson Road and into the Quick's Bottom Park.  Dodging muddy parts of the trail we came out on Markham road and walked towards the VI Tech Park and into another set of trails that lead into the HCP (Horticulture Center of the Pacific).  We turned back with the lake just ahead of us and headed back toward the Tech Park and to Markham Road and back into the Quick's Bottom park on our way back to Wilkinson Road and onward to our cars on Greenlea.  It was a 90 minute walk this time.  We averaged almost 6000 steps in this walk.   We went to the Fireside Grill for a nice lunch.

The group pass the Spindle Whorl at Laurel point that marks this as former First Nations Land.
The CanRamblers parked near the Laurel Point Inn and walked part of the David Foster Way path along the edge of the harbour to the Fisherman's Park and then headed along Ontario Street and Montreal Street  on our way back to where we parked.  There are lots of heritage homes in the James Bay neighbourhood and we stopped to look and learn at three of them.  Some of the group went to the James Bay Inn for lunch.  Parking is always a problem at that place, and some of us couldn't find adequate parking so we had to find somewhere else to have lunch.  Due to "Resident's Only" parking and shorter duration limits it is not possible to find on-street parking closer than six blocks from that Inn.