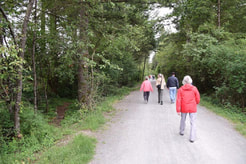 Walking out the Galloping Goose Trail from Luxton.
The group drove out to the Luxton Fairgrounds parking area and started out on the trail from there.  We really noticed the difference in how many changes there have been to the area with many more new homes and a new school on Happy Valley Road.  We walked all the way out to where the trail crosses Happy Valley Road again, about 3 kilometers each way.  We drove the short distance back to Bucky's Taproom on Sooke Road for a very nice lunch.
Terry's photos
Phil's photos
Claudia's photos
Colin's photos 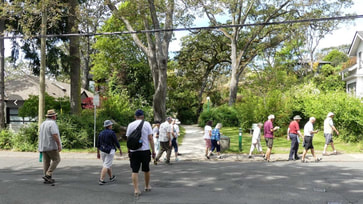 A good turnout for the Oak Bay lanes and streets walk.
The CanRamblers started at Windsor Park and walked over to St. Dennis street and followed the paths and Brighton Ave. all the way to Victoria Ave.  We then walked down to Brighton where the path descends some stairs over a rocky part.  We spotted a narrow back lane and decided to follow that rather than stick to streets.  Eventually we came back out near Windsor Road again and walked back to the park again.  It was rather warm, about 28c, so we headed over to Queen's park, the little park near the Oak Bay Marina, where we found two picnic tables near the sea to use for a really nice lunch break.
Claudia's photos
Colin's photo-video
​Terry's photos 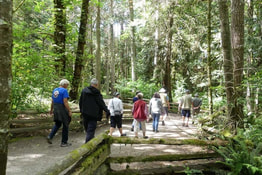 Walking through Centennial park
Centennial park is a nice quiet place to enjoy nature.  We first walked around the perimeter of the park and then found a couple of the trails that criss-cross the middle of the area.  Either we were walking too fast or we just wanted to get to the Prairie Inn for lunch or we wanted to get back in our cars before the rain started, but all that walking only took about 40 minutes.  The rain drops started just after we drove away, and the rain was more like a downpour by the time we got into the pub.  The sun was out again by the time we finished lunch.
Terry's photos
​Claudia's photos 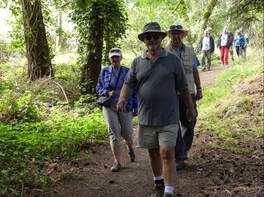 The group discovering Kentwood park
This was a perfect day for checking out a "new" mini park and to revisit two other small parks nearby. Parking near Lochside Elementary we first walked across Royal Oak Drive at the crosswalk and up Lochside to the entrance of Kentwood Park.  This unassuming little piece of forest is probably what most of Broadmede must have looked like before all the development.  We found the exit trail near the top of the park and went out through a chip path to Kentwood Place.  We then walked to Amblewood Drive and back to Royal Oak Drive where we crossed to enter Emily Carr Drive.  Along this street we soon came to the brown trail marker for the Rolston Trail on our left and walked to Pondwood Park.  For the final mini park we walked back along Royal Oak Dr. past the Lochside Elementary School and on to Outerbridge Park and walked most of the paths and trails in this nice garden/pond area. We could really see the effect the dry weather has had on the cedars and the ponds. This park is gasping for rain. Finally it was time to leave for lunch at the Monkey Tree Pub.
​Good weather, Good exercise and Good friends.
Dave's photos
Terry's photos
​Claudia's photos 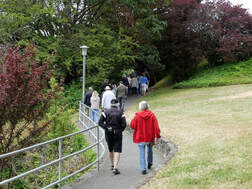 Starting out from Spinnakers to walk towards the Westbay marina and then back again.
We parked on Kimta Road near Spinnakers Brewpub where there is free 3 hour parking.  We then walked away from Spinnakers to the Westbay Marina and back.  That's just the right distance to walk in a hour, stopping to admire the views along this scenic waterfront pathway.  The tide was very low; the farthest out I have ever seen.  The group prefers the Gorge Point Pub for lunch over Spinnakers due to the prices and food portions.  It's only a ten minute drive if there isn't any construction slowing down the traffic. The Gorge Point Pub can have parking shortages, so it's advisable to carpool, and you'll have less problems finding a space to park.
​Colin's photos
Phil's photos
Claudia's photos
​Terry's photos 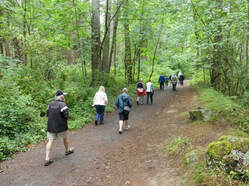 A really good turnout for this Beaver Lake forest walk.
We met at the parking lot for the swimming beach at Beaver Lake Park.  After a brief discussion we chose to walk in the forest because we would be more sheltered there in the event of rain.  We headed down the parking lot and into an old disused paved road that leads toward the Pat Bay Highway.  We chose a smaller trail to the right and headed south through the woods.  After a few turns we found ourselves back at the road between the two parking lots of Beaver Lake.  I led the group along the trail that leads to Pipeline road to show them the old city water pipe.  We spotted a young Barred Owl sitting in a tree above the Colquitz River near the end of Pipeline Road.  The owl flew to a more accessible tree and we were all able to get a good look at it.  A few raindrops started falling at this time, but none of us got really wet.  We decided to head for the Med Grill for lunch at that point.  The Med Grill was very accomodating for our group of 17 people.
​ 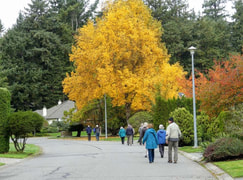 It was a wet and foggy day;  but the CanRamblers  walked anyway.  We parked along Cook Street near the end of the street nearest to Dallas Road.  The wastewater pipe construction project was supposedly going to take away all of our parking long the waterfront.  We crossed the street and headed into the path that leads to the spiral stairway that leads down to the beach.  The tide was out and we walked along the gravel beach all the way to Clover point, then after resting for a while we crossed the point and went down some stairs to the Clover Point Anglers boathouse and walked along the curved seawall that leads to Ross Bay.  We took a path that got us back up to Dallas Road and headed back the way that we had come, but this time on the path at the top of the cliffs.   All the time the light misty rain was falling, it was a pleasent walk even with the fog and rain.   Our group of 15  went to the Ross Bay Pub and had terrific service and a good lunch.
​
Colin's video photos
Terry's photos
Linda's photos
Claudia's  rocks 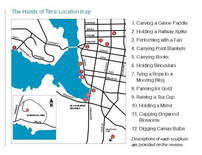 Here is the map that shows the approximate location of each "hands" sculpture. You still have to look carefully to see then though. Some are hidden on the lamp standards or on a rock or stone wall.
The CanRamblers met outside of the Strathcona Hotel and walked down to the inner harbour  to see the sights and to try and find as many of the "Hands Of Time" that they could find.  These small sculptures are placed on the city's lamp standards, on stone walls and even mounted on the rocks along the inner harbour shoreline.  Each one is supposed to tell the story of some part of Victoria's history.  They were added to the city's "art" collection in 2013.  A map can be found online that will help you find them, but they're not that easy to see every time.  The group only missed two that i can see;  one that is right behind the orca that is carved out of living plant material in front of the Empress.  It's way up near the top of the lamp pole.  A hand holding a  teacup.  The other one that the group missed is very near the stairs that the group descended to get to the lower causeway in the inner harbour.  It is in the base of the lamp standard near those stairs.  I think that by the time the map reader got his bearings they had it all figured out and found a lot of them.
Here's Colin's photos
Here's Claudia's photos 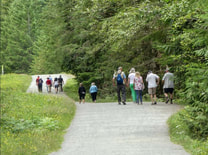 Here the group is heading back to the parking area after visiting the trestle.
Marion arranged this group outing to the Kinsol Trestle that is out beyond the Shawnigan lake area and goes across the Koksilah River.  This is one of the largest wooden trestles in the British Commonwealth.  It was finished in 1920 and the last train that crossed it was in the late 1970's.  A fire in the 1980's almost destroyed this relic of the railroad history of Vancouver Island, but it was restored and improved and is important part of the Cowichan Valley Regional  Trail that goes from Langford to Duncan.  It is also part of the Trans Canada Trail system.   The walk from the parking area to the bridge and back is about 3.4 kilometers on the old railway bed.  We spent about an hour at the trestle and then went back to the Merridale Cidery for lunch.
​ 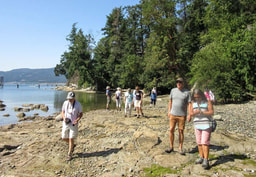 The tide was out just enough for us to enjoy a few minutes on the beach at Coles Bay.
It's been three years since we walked these trails from Bradley Dyne Rd. through to Coles Bay Regional park and back.  A nice rural walk with plenty of trails, a beach and a park trail to explore.  A perfect weather day to do this walk.  We went back to the Prairie Inn for a really nice lunch.  One of the walking group's favorite places to eat.
Colin's Video slideshow
Phil's photos
Terry's photos
Claudia's photos 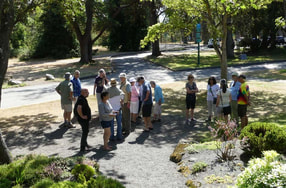 This was the whole group, minus Claudia who took the photo.
This time the CanRamblers walked through the most scenic parts of Beacon Hill Park.  They parked along Cook Street near the side of the park and started the walk near the corner of Cook and Dallas Rd.  The walk ended up at Sutlej St. and the group went straight through to the Beagle Pub on Cook Street for lunch.  We walked back to the parked cars after lunch.  David Peach invited two guests of his from France to join the walk.
Terry's photos
Claudia's photos 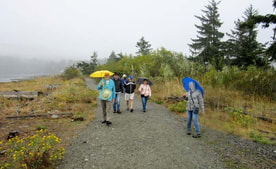 Walking back in the light rain.
A smaller group walked the length of Whiffin Spit out in Sooke this time.   It was a foggy day for the first half of the walk and then it was just a light rain shower.  No wind to speak of so it was still a very pleasent walk out and back.  About three and a half kilometers round trip to the end of the spit and back.   We went back to Buffy's pub for the two burgers and fries or salad for $12.95 Wednesday special.  Fat Tug was on sale at $5.95 a pint too.  We were earlier than we expected for lunch so we were ahead of the lunch time crowd.  I think that everyone enjoyed their lunch.
​
​ 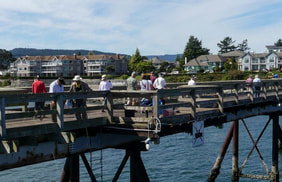 Most of the group walked out the pier at Sidney.
After some confusion that I'm to blame for, the group finally met up at the Tulista park area and started our walk towards Sidney.  The gate was closed for the part through the Anacortes Ferry terminal area so we had to walk all the way around that compound, before we could resume our walk along the seaside as far as the large pier that most of the group walked out on.  By this time it was time to head back and the Anacortes Ferry had left so we could go along the much shorter sea side path.  We headed to the Prairie Inn for another wonderful lunch.  You can't beat the service and food at that pub; especially on a Wednesday when they have amazing lunch specials.
​